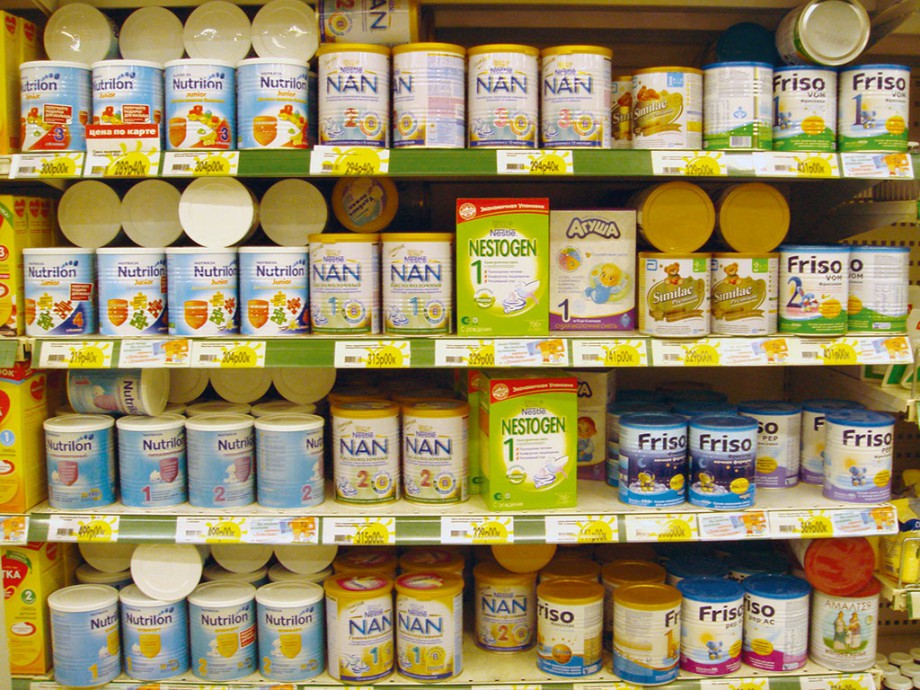 Supporting the need in healthy infant nutrition is one of the main tasks for all parents. Of course, breastfeeding is a priority, but nowadays high-quality infant formula can give children all elements and nutrients that are necessary for life. 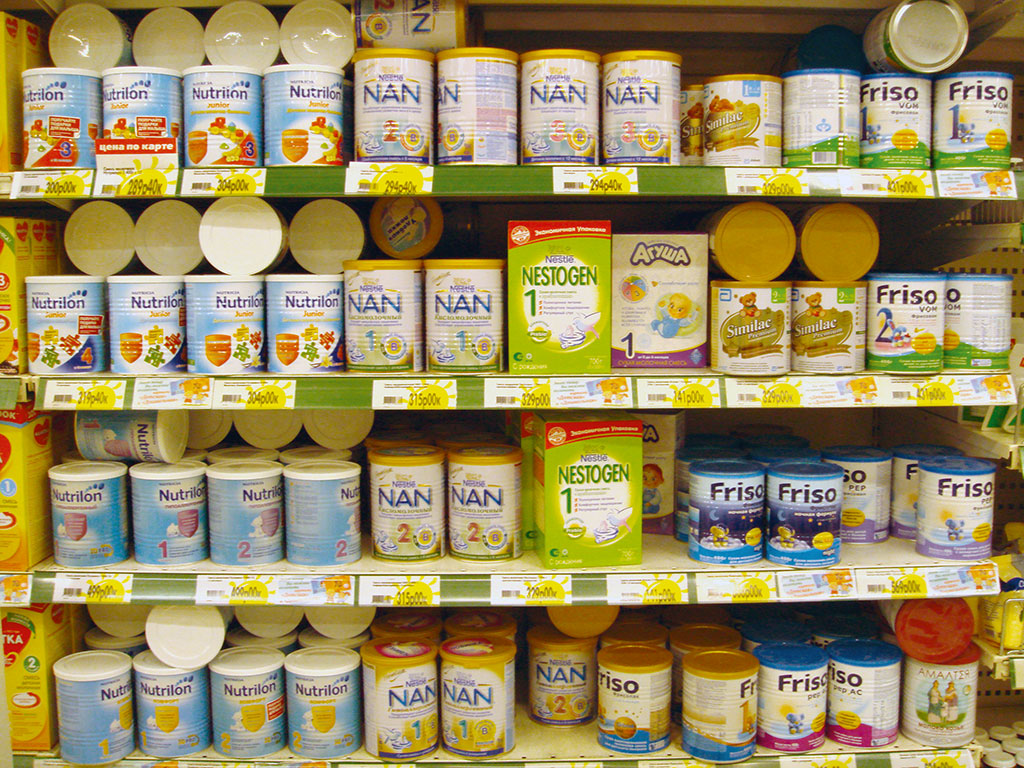 In Russia, dry infant formula industry began to develop in 1910's with the appearance of “milk cuisines”, which had the purpose of eliminating the infant mortality due to irregular nutrition. Fully adapted infant formula appeared in our country in 1980's, when foreign manufacturers entered the market.

In 2013, the volume of Russian dry infant formula market was valued by Research.Techart as 53.5 thousand tons, which is 8.9% higher than last year.

Nowadays, Russia has a broad assortment of production by both national and foreign manufacturers. According to the sales volume, imported production is much higher in demand, and during the last few years its share is growing constantly, though the share of Russian manufacturers has fallen from 39.3% in 2011 to 31.3% in 2013 in natural terms.

Export supply of dry infant formula is not significant and has no big influence on the market. Exports hold from 8 to 16% of all production made in Russia.

Dry infant formula production in Russia in natural terms is stable, with the annual volume of 19-10 thousand tons for the last few years. In 2013, a slight decrease was seen in natural terms: production volume has reached 19.6 thousand tons, compared to 20.2 thousand tons in 2012. At the same time, the growth in money terms is seen due to the increase in production prices for formula. In January 2014 the average price from Russian manufacturers has reached 217.5 thousand rubles for a ton of dry infant formula, compared to the price of 146.6 thousand rubles for a ton in January 2012. Thus, the rise in prices was 48.4% in two years.

The community of Russian infant formula manufacturers is very limited. At the same time, the produced formula can be divided to Russian and foreign brands.

Until 2012, such company as Zauralye Products LLC producing Nutrilak dry infant formula took part in the market, but it couldn't hold its position, and in 2013, this organization went bankrupt.

Almost a half (48.7%) of all infant formula imported to Russia are produced under Nestle trade mark. More than 18% belong to products by Nutricia and Nutrilon. Other kinds of infant formula hold less than 10% each in total production volume.

It's worth noticing that the structure in natural and money terms is rather different. It is caused by the broad range of average prices from different companies. Thus, Dairy Goat Co-operative (New Zealand) imports Nanny infant formula based on goat milk to Russia, with the price from 950 to 1050 rubles per kilo, though the imported Nutricia/Nutrilon infant formulas made by the German Milupa Gmbh costs 140–230 rubles per kilo.

Dry infant formulas imported to Russia are produced on different manufacturing areas. The bigger share the company holds in the imports structure, the more manufacturing plants were involved in the manufacturing process. Thus, for example imported breast milk surrogates by Nestle are supplied from the company plants located in Switzerland, Netherlands, France and Germany.

Istra Nutricia Infant Nutrition LLC is the absolute leader in dry infant formula exports: in 2013, it held 70.9% of all breast milk surrogates exported from Russia. The big share of the company in the total exports volume can be explained by its creation as the branch of the Dutch company Nutricia in Russia for supporting the needs of consumers from Russia and the neighbouring CIS countries. Significant supply volumes belong to Infaprim CJSC (22.5%). It's also worth noticing that the small share held by Nutritech Company CJSC can be explained by the fact that Ukraine, the main customer of Russian dry infant formula (77.6% of all export supply in 2012, 46.6% of the 2013 supply) has its own plant producing Nutrilak infant formula (Khorol Canned Milk  Plant for Infant products LLC) and supports the needs of Ukrainian consumers itself.

There are 200 different assortment positions of infant formula on the shelves of infant nutrition retail stores, in which 22.1% belong to Nutricia company, 14.6% to the Swiss Nestle, 10.6% to the Russian Nutritech. These manufacturers' trade marks are the most wide-spread among the national consumers. The presence of local market players can also be noticed. Thus, Hyproca and Vitacare offer only infant formulas based on goat milk, when others offer cow milk formula.

So, the depth of each assortment group of specialized kinds of infant formula observed before is similar. Their common share is 91.3%. Infant formulas for premature of underweight children are 8.7% of the assortment.

The vast majority of the products were made without the use of sour ferments. The share of sour milk formula is only 2.5%: Nutricia has two kinds of such infant formula, so has Nestle, one kind belongs to Nutritech.

Dry infant formula is usually packed in tin cans or cardboard boxes. Tin cans are the most common kind of package for such goods, their share is 63.3%. 36.7% of infant formula offered in the market is released in cardboard packages.

Realization of dry infant formula in the B2B branch is usually done through main manufacturers' official distributors. One of the sales' specific features is the large share of state purchases. Infant formula is bought by state health service enterprises, such as ministries, hospitals, perinatal centres, diagnostic clinics etc), orphanages and other enterprises for orphans, welfare enterprises, penitential system enterprises (prisons, colonies) and other organizations.

In the В2С branch, the sales structure is various. For manufacturers, geographical presence and availability of the production means much, that is why leading companies try to involve the maximum of sales channels, from small shops and pharmacies to large chain hypermarket stores.

Experts count that the average monthly costs for purchasing goods for children are from 3 to 6 thousand rubles. The significant share (38%) belongs to retail chains for children's goods. Among the important channels for purchasing infant formula are also super- and hypermarkets (28%), traditional food and children's stores (15%), pharmacies (14%) and online stores as well (5%).

The market distribution of dry infant fromula is one of the high-margin business spheres, including the long chain of added value formation. The average consumer prices are three times more than producer prices: the average producer price for dry infant formula in 2013 was at the level of 210.3 rubles per kilo, and the average consumer price for breast milk surrogates in 2013 was 576.7 rubles per kilo.

The most expensive formulas are those made of goat milk, and also hyppoallergic formulas and those for underweight children. The lowest prices are for kinds of infant formula based on cow milk.

There are several factors that have an influence on the development of dry infant formula market.

Among the political factors, we can notice the implementation of the Development strategy for children's goods until 2020 which is directed on the increase in export and (what is important) innovative potential of the national children's goods manufacturers. Also, the implementation of the Development strategy for food and processing industry until 2020 plays its role, with modernization of dairy manufacturing for reducing its costs as one of its directions. The government has been subsidizing such tthings since 2012.

Such forms of supporting families with children as maternity capital have their influence on the birth rate. There is an opinion that the increase in birth rate is the achievement of the active child-bearing age (20-35 years old) for women of the baby boom generation. The birth rate growth has its good influence on breast milk surrogates market.

The popularity of bottle feeding in the modern society means much for the market development.  According to the value by Research.Techart, in 2013, in Russia more than 65% of children from 3 to 6 months old were bottle-fed. At the same time, bottle-feeding of kids of that age is becoming more and more popular: in 1995, 55% of children were bottle-fed.

The parents' arguments for bottle-feeding are that formula can be a substitute or an additive to breast milk, and that formula has useful nutrients for a child's growth and development.

Taking into count the trends and factors of market development, the consumption of dry infant formula in Russia can reach 62.5 thousand tons until 2018, with the average annual growth rate of 3.2%.