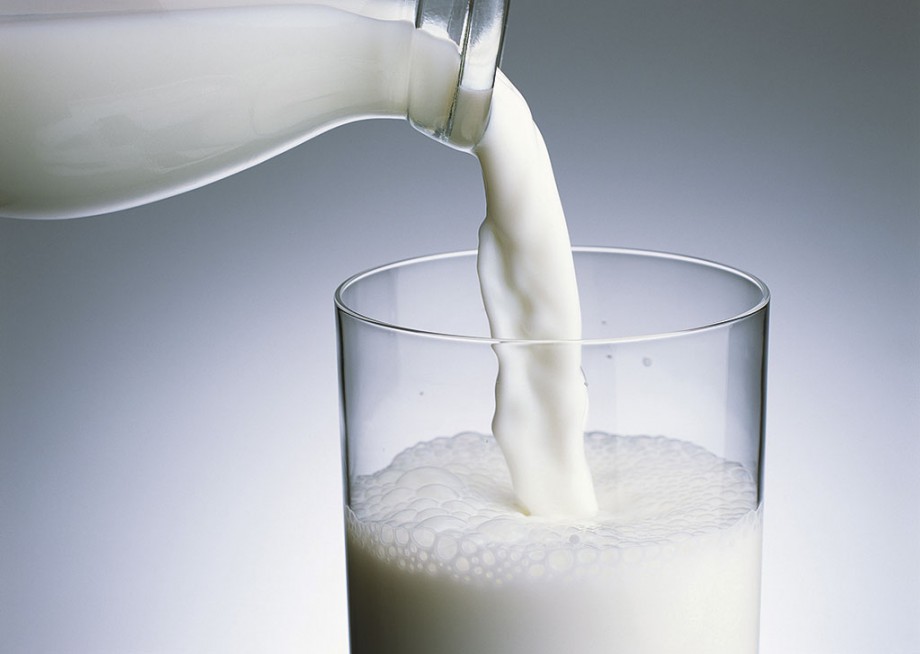 Russian raw milk market is customer-oriented. B2B branch in common and processing companies in particular are main consumers of this product. Raw milk is essential raw material at the food market. Even the fact that many dairy products are made of dry milk doesn't eliminate the importance of raw milk.

The livestock of cows is 8.661 thousand numbers of head for 2013. According to the forecasts by experts from Step by Step company group, cattle livestock will continue to fall until 2015 but the changes won't be significant. Changes rates for livestock are falling, reaching only 2.3% in 2013. Cows' livestock in all household categories in Russian Federation has declined by 3.2% compared to the same last-year period. So, we shouldn't expect any radical changes in recent three years.

Let's see the dynamics in cows' livestock in different kinds of households. Here, we can see several new trends. Firstly, the level of cows' livestock is declining in personal households, the same trend is seen in agricultural organizations. But the decline rates are not so big. Secondly, new kinds of households, such as farms and individual enterprises, have appeared during the post-Soviet period. Having been separated, this category has been growing steadily since 2002. 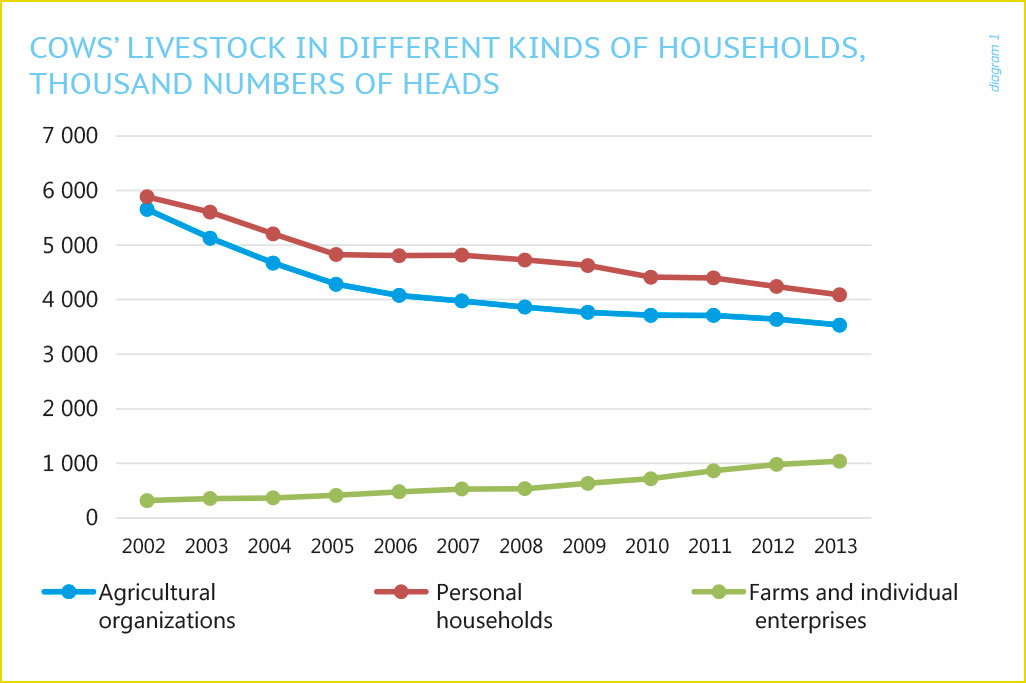 Raw milk production volumes in Russia as a whole has slightly fallen during the last five years. The greatest fall took place in 2013, when the value has declined by more than 1,000 thousand tons compared to 2012. 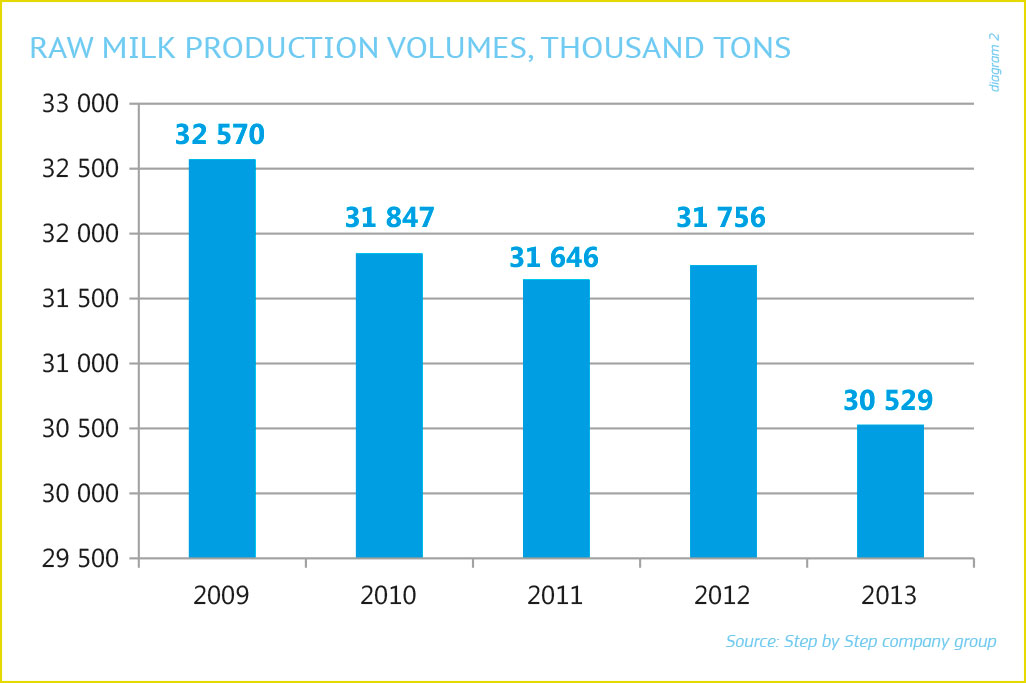 The fall in cows' livestock has the main influence on the fall on productivity. At the same time, the increase in milk yield per one cow decreases the fall rates. The productivity is growing mostly due to the implementation of new manufacturing technologies, selection and  the improvement of feed base. But is the cows' livestock doesn't grow, the decrease rates for raw milk can grow.

If we look at the geographical placement of manufacturing capacities, we can see that it doesn't change significantly in terms of location. Large households tend to grow. It takes place because they merge the smaller market players or make them leave the market as small households can't stand the competition with large holdings.

Raw milk market specific is the fact that this product is short-life. Unprocessed milk can be kept for up to 36 hours, and after that it is lost if not processed. So, the outer trade of raw milk is practically impossible. Imports and exports include only the trade of dairy products or processed milk.

The other specific of Russian raw milk market is the strongly-marked seasonal influence. It can be explained by the difference of cattle productivity depending on the season. In summer months, the yield increases due to the pasture and the excessed feed base. During the cold season, manufacturers have to feed the cattle by the lower-quality food. Due to this, raw milk productivity falls inevitably.

Seasonal changes have their influence to the price level at the market. The manufacturing peak during the warm months make the excessed supply at the market, leading to the fall in prices. During the winter months, production volumes fall, so the price grows.

Though the price for raw milk is much influenced by the seasonal factor, the market volumes in money terms also has its seasonal changes. But the trend for the fall of market growth rates in money terms can be seen. It takes place due to the decrease in production which is not replaced by the rise in prices.

The feature of Russian raw milk market is the high rate of vertical integration of the largest manufacturers. Vertical integration to large holdings helps to cut the expenses, simplifies the traffic organization and, which is the most important, gives the possibility to neutralize the results of seasonal changes due to the production diversification.

The largest raw milk manufacturers at the Russian market are:

The other main trend is the increase in production diversification. Practically all main raw meat manufacturers are also involved, except dairy animal-breeding, in meat animal-breeding, poultry-breeding, farming (for inner needs and direct sales of grain, cereals, etc.).

Nowadays, several changes are seen at the Russian raw milk market. From the one side, the decrease in market volumes has been taking place during the last few years. From the other side, the situation at the Russian market due to the implementation of production sanctions, forces to increase the production of national raw materials for dairy products. But not all manufacturers are ready to be involved in import replacement process. Nowadays, large investments in dairy production development is quite risky. Firstly, the risk is linked to the possibility of early sanctions lifting. Even if the ban for dairy imports is kept for a year as planned, import replacement will take not less than 3-4 years.

The development of raw meat market in Russia is held by:

1. Seasonal changes in production volume and prices. Firstly, this factor throws obstacles to new market players.
2. Low investments to the industry. There's a need in money for buying the livestock of more productive breeds, improvement of the feed base etc. Rightly planned investment can lead to the double increase in productivity compared to the current situation.
3. Irregular planning or the lack of planning and development strategy forecast focused on the increase of the company's market share and strengthening the competitive position.

As a whole, raw milk market saturation rate is 55-60%, which makes us talk about the high growth potential. But the headwinds don't let the market show the significant production growth rates.