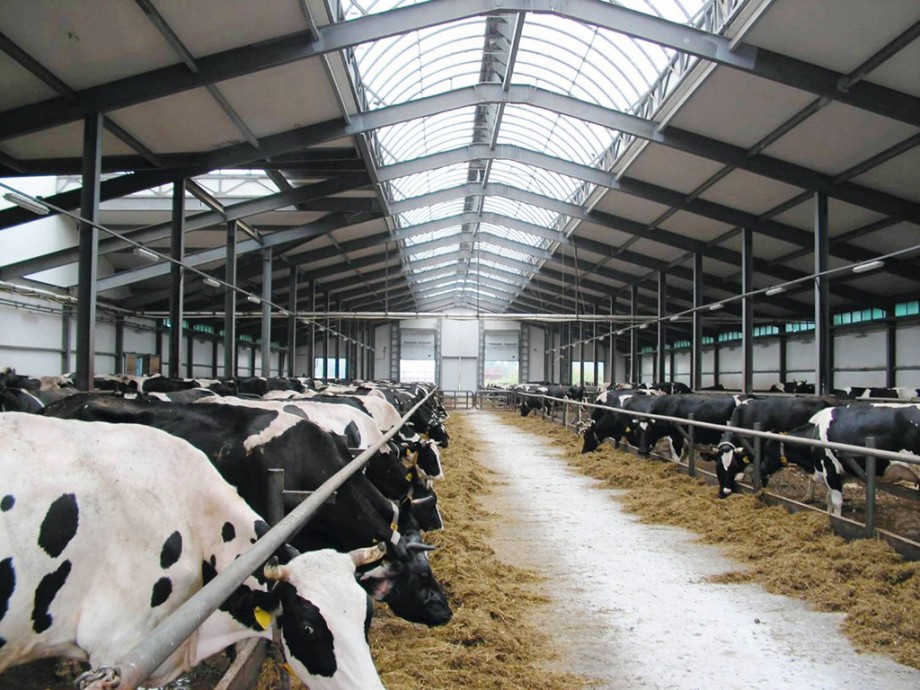 The production growth has been gradual, with no drops in any period. During the first half of 2016, about 12.9 million tonnes of compound feed were produced, which is 7% more than in the same period of 2015. These facts indicate steady market development. 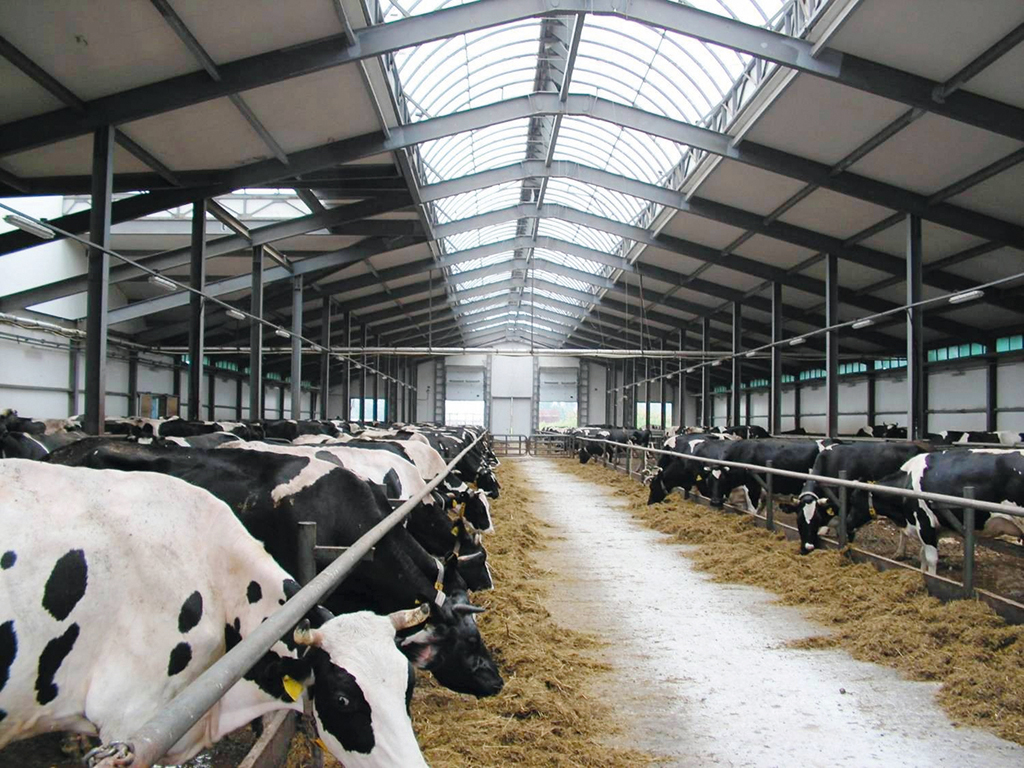 99% of compound feed in the Russian market are of domestic production, both imports and exports are negligible. The dynamics of the compound feed market volume nearly corresponds to the linear output growth (5-7% per year).

The compound feed production correlates with the data on the livestock and poultry population. In 2015, the main contributors to the improvement of the agricultural sector were poultry keepers, who managed to increase the poultry population by 4.7% within a year. A sharp grow was observed in pig farming - 10% in 2015. The population of goats and sheep is growing at slow rates (less than 1% per year). A negative dynamics is observed in the number of cattle farms (minus 1-2% per year).

If we take regions producing compound feed, the evident leader is the Belgorod Region. At the end of 2015, this region produced 18.5% of the total volume of the compound feed produced in Russia. This distribution is accounted for by the location of large enterprises of the Belgorod Region - “Belgorodsky Kombinat Khleboproduktov”, “Miratorg”, “Agroholding BEZRK -Belgrankorm”. The Chelyabinsk Region and the Leningrad Region follow far behind (5,5% and 5,2%).

The Krasnodar Krai, the Republic of Tatarstan and the Tambov Region also show good growth rates.

On the whole, top 10 regions producing compound feed form 50% of the total volume of production. 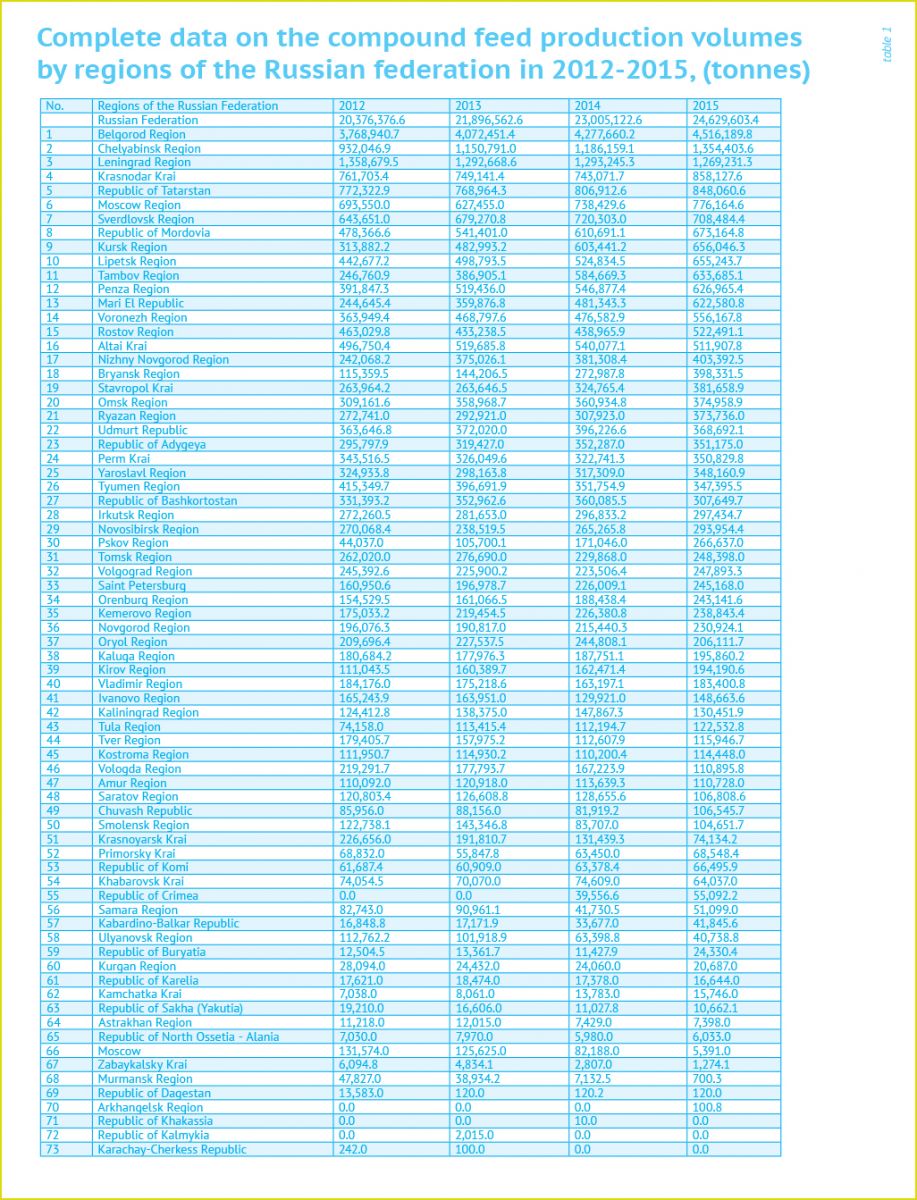 Prices for compound feed of all types have increased in recent years. The final cost growth begins with the increase in producer prices. In 2015, prices of compound feed producers rose in average by 45% compared with 2012. Speaking in detail, the rise in prices for feed for poultry made about 40%, for cattle - 43%, and for pigs - 60%.

The main rise in prices occurred in 2015, mainly due to the devaluation of the ruble. Almost all feed vitamins, 70-80% of feed enzymes and a significant portion of amino acids are supplied from abroad. In the near future the situation can change only in terms of amino acids. The drop of the ruble rate has caused a rise in prices for feed additives, which make up a significant part of the compound feed cost. Also, the compound feed cost was affected by the rise in producer prices for grain, which is the basic component of compound feed.

The major suppliers are Hungary, Denmark, Germany. The goods traffic from the Netherlands, Belgium and Lithuania has significantly dropped. It should be separately noted that in 2015 a great volume of the compound feed imported from the Ukraine at a very low price was recorded. Currently, the Federal Service for Veterinary and Phytosanitary Surveillance (Rosselkhoznadzor) has introduced temporary restrictions on import of feed and feed additives produced by some of the Ukrainian enterprises, which will affect the structure of imports in the near future. 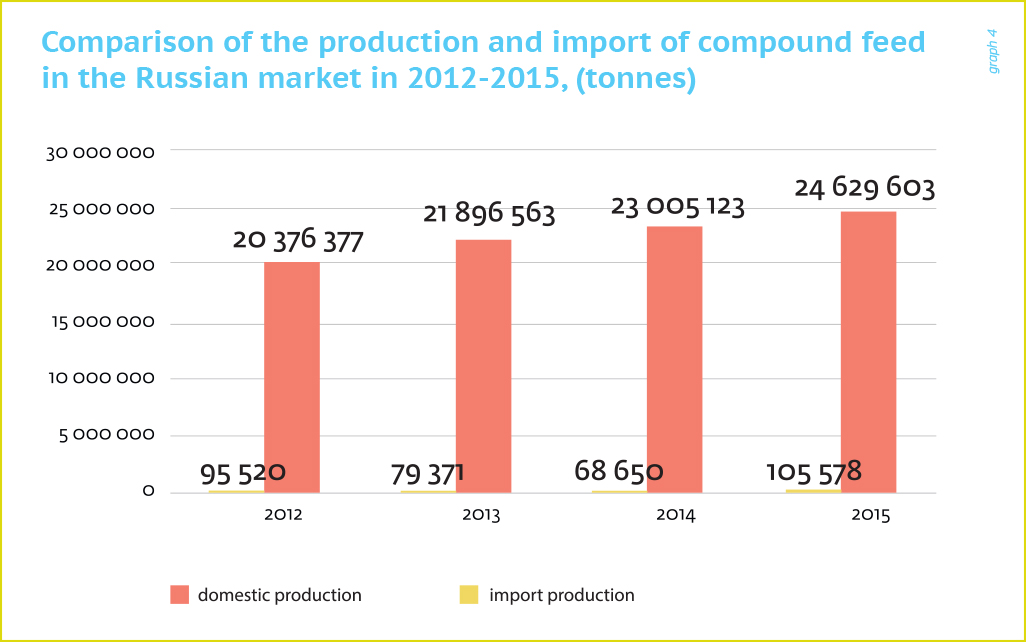 If the import of compound feed can be called insignificant in the total volume of the market, then the compound feed export is really of rare occurrence. In 2015, the export value amounted to 26 thousand tonnes.Such a low rate can be explained by the fact that Russian companies preferred to export cornmeal instead of processing it. It is also worth mentioning that in the Russian compound feed, the grain content percentage reaches 70%, while in the compound feed of the European Union countries this figure is less than 50%, which increases its nutritional value at the expense of protein components. Due to the high grain content in the domestic compound feed, imbalance is observed both in terms of protein and amino acid content, therefore the production of animal products in this country requires twice as much feed compared to the standards of developed countries.

The main consumers of Russian compound feed are Serbia, the Ukraine and Lithuania. 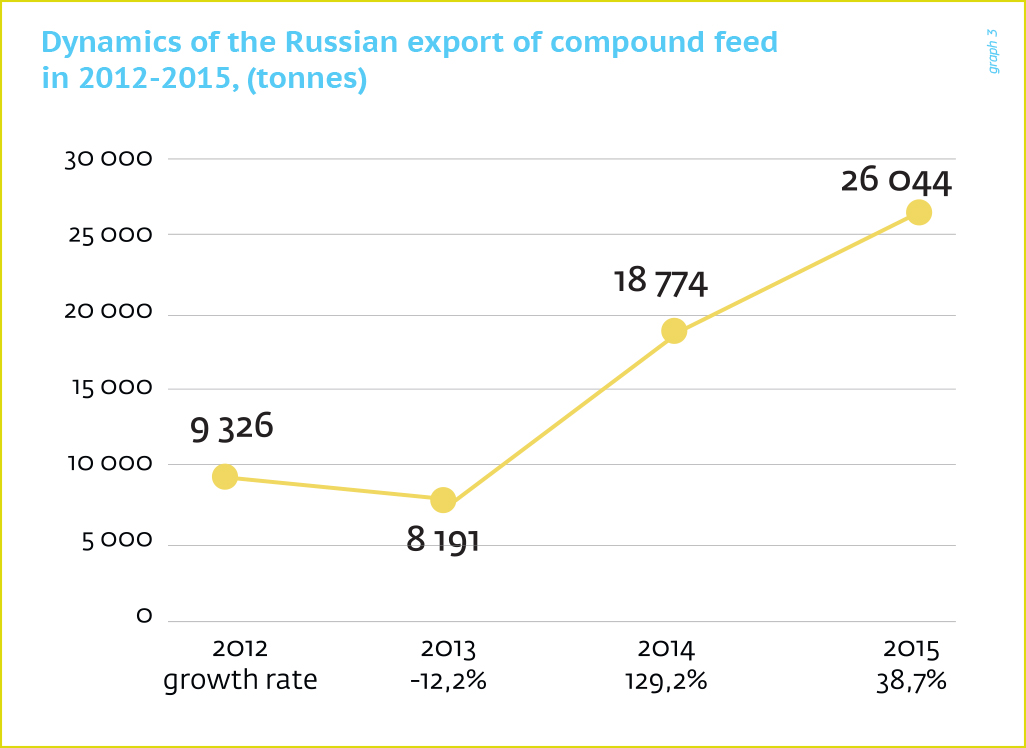 It should be assumed that in future the compound feed market will continue to grow, mainly at the expense of domestic production. This is due to the state policy aimed at self-sufficiency with meat and meat products. According to the official statistics, this figure was around 88%. In this regard, consumption is increasing, and, accordingly, the production of compound feed. According to the State Programme of Agriculture Development and Regulation of Markets of Agricultural Products, Raw Materials and Food, in 2020 production of compound feed of all types should reach 40 million tonnes.If we talk about development within the industry, the main driver of growth is feed for poultry. Recently the Russians have preferred poultry to pork and beef, which are rising in price. This fact will give an impetus to increasing the production of corresponding feed. Also, the further drop in the production of cattle feed will be quite not unreasonable. 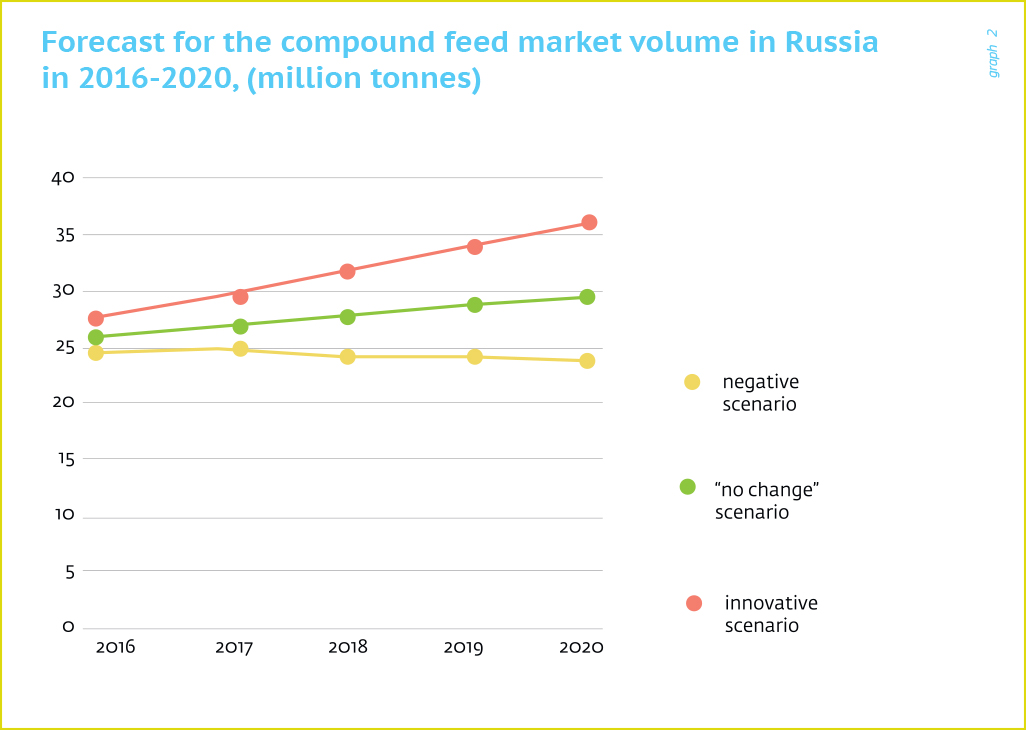