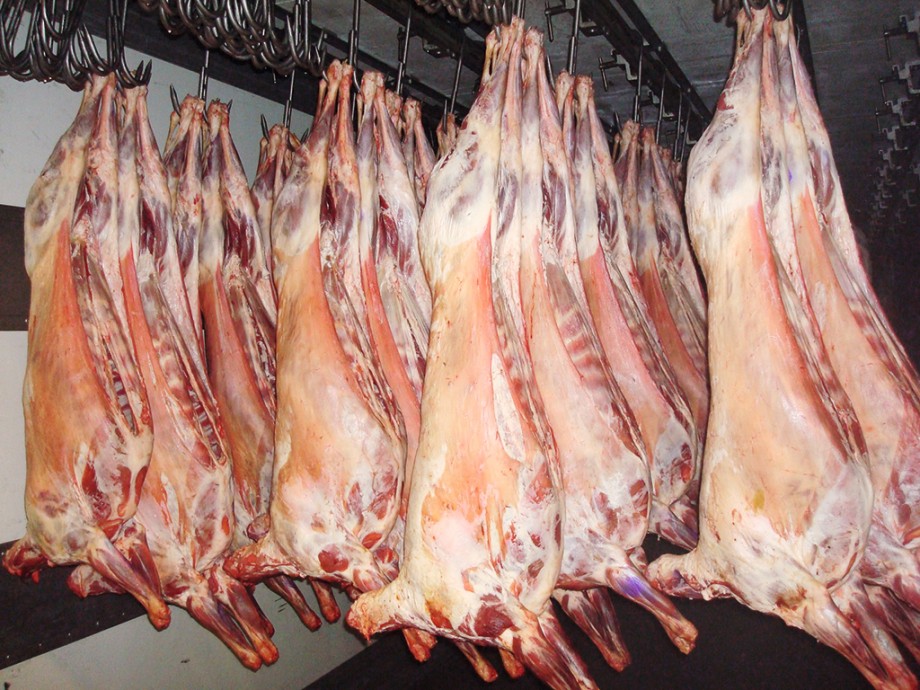 General description of the meat market

As of the end of 2016, Russian farming companies and farmers set their record in slaughter animals meat and bypass in-kind production (poultry excluded) for the first time in the post-Soviet economic history – 2,620 kilo tonnes, and this is by 14.4% more than the index of 2015, and 2.2 times more than in 2010 (see Fig. 1). 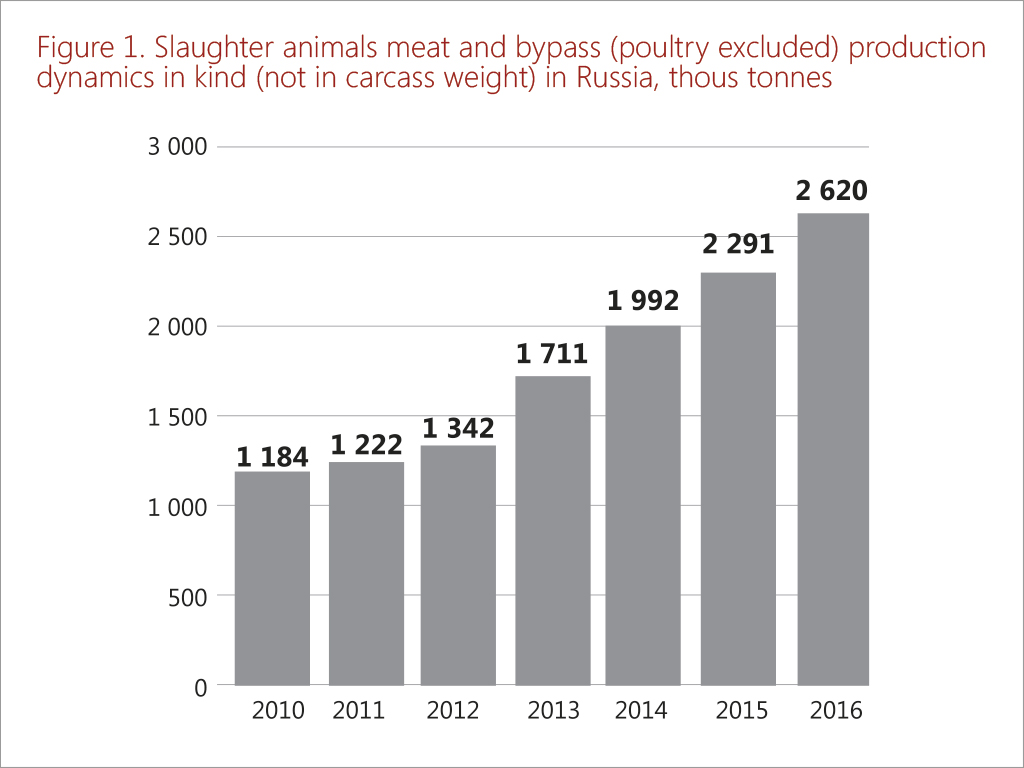 It is mainly intensified pig stock breeding that such a rapid growth of production owes to.

Today pork occupies 78% of the whole market of slaughter animals meat (excluding poultry). The share of mutton in this line is fairly humble - only 0.2% of the market (see Fig. 2). 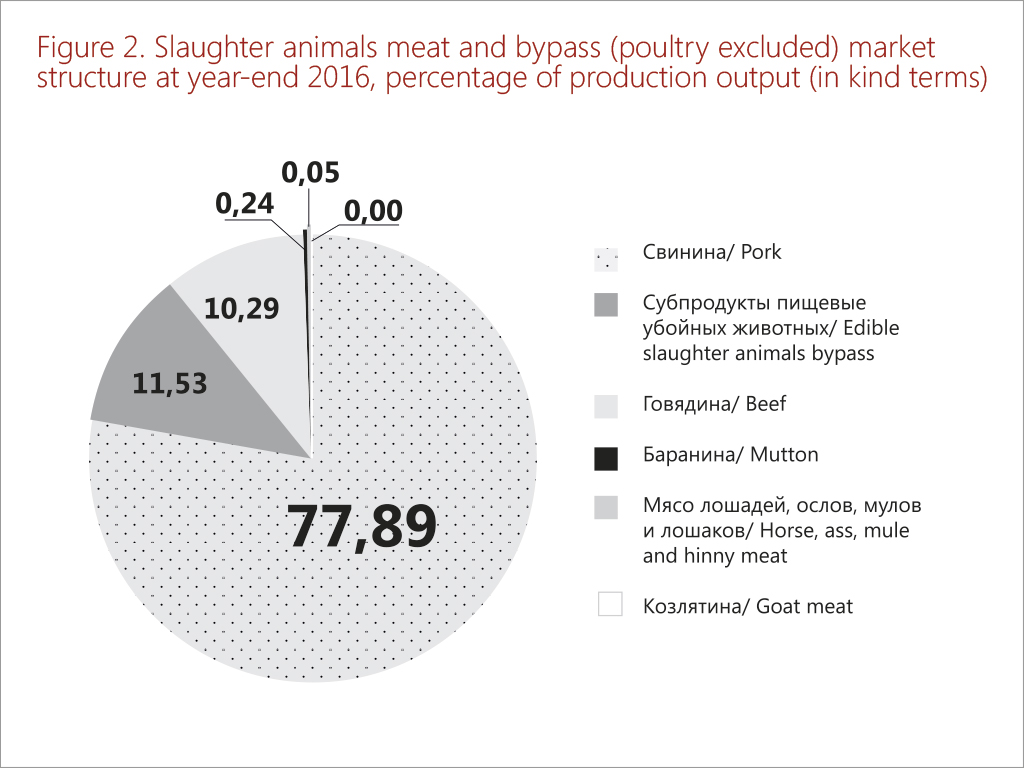 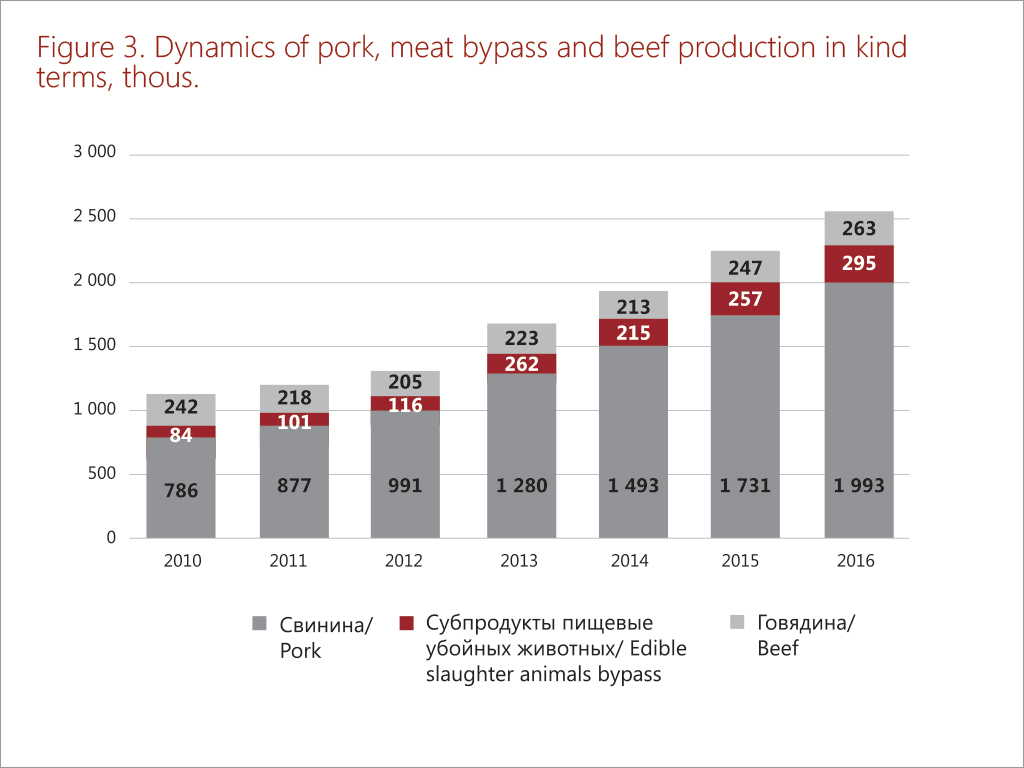 Mutton is unfairly less popular with the consumers as traditional meat kinds - pork, beef and poultry. Mutton is recommended to be consumed by infants and elderly people. This meat contains much fluorine which strengthens teeth and protects them from decay. Also lecithin contained in mutton prevents diabetes, stimulates pancreas, and moreover, it improves cholesterol exchange and has anti sclerotic effect.

Potash, magnesium and sodium salts that occur in mutton are good for heart and vessels. This meat contains much ferrum (one third as much as in pork) essential for blood-forming. Mutton is as well rich in iodine providing for proper thyroid function.

Mutton is highly nutritive and gustatory. This meat is equal to beef in mineral substances, amino acids and proteins. Mutton is higher in calories than beef. Some scientist suggest that mutton-consuming nations are less subject to atherosclerosis.

6.7 kilo tonnes of mutton in kind terms were produced in Russia in 2016, that is by 7.6% more than in 2015. The hold of mutton in the overall Russian market structure does not exceed 0.3%. Mutton is most popular in Muslim regions of the country, which is due to a specific religious aspect of these territories: consuming pork - which is the most popular meat in the Russian federation - is prohibited by Muslim food culture model; to the contrary, mutton is preferable to be served to Russian Muslim community of 21 million people. This is why the consumption increase of this meat principally corresponds to the subjects of North Caucuses and the Volga region. But even here meat products consumption at certain times of the year can be limited by religious customs. 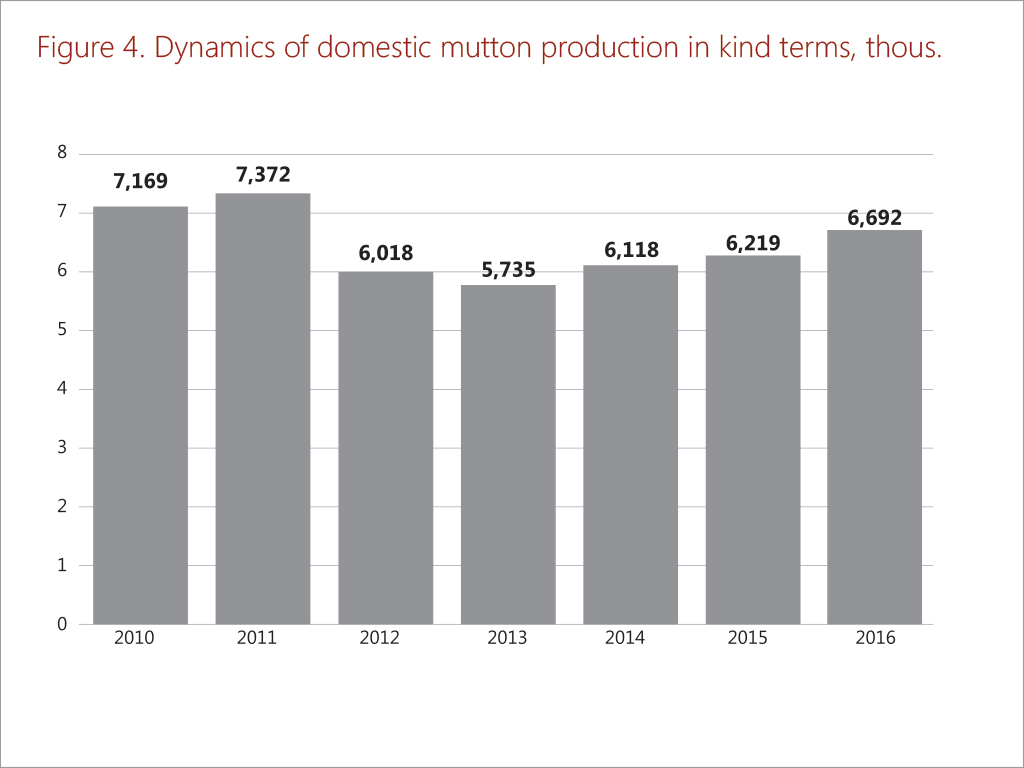 Almost 98% of produced meat is covered by slaughter-warm mutton, fresh or chilled. Frozen mutton is rare – about 2% of the market. Another 0.1% of mutton is supplied salted or dried and in brine (see Fig. 5). 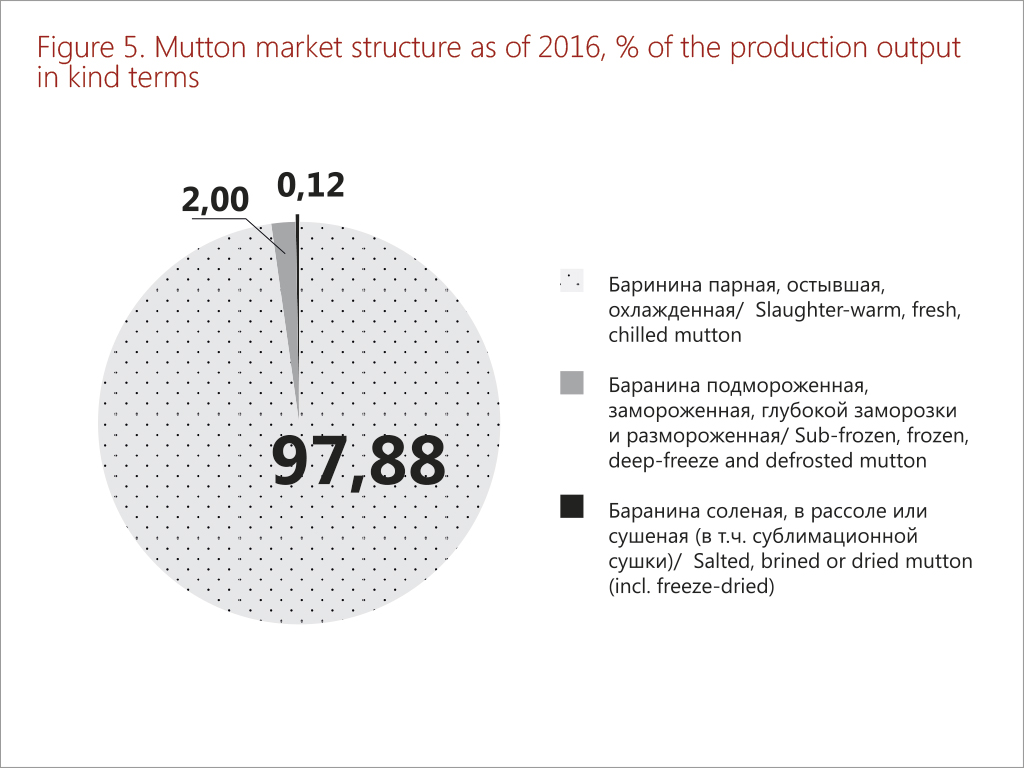 Monthly dynamics of mutton average retail prices from January 2015, Russia wide is shown in Figure 6. As the diagram shows, the cost of mutton reached its peak in April 2016 – 349 RUR per kilo. This fact can be explained by the significant devaluation of the Russian ruble leading to price leap. Our market stays highly dependent on import supplies: the share of import reached for 30% of the total kind consumption volume in 2016. That is why mutton retail prices are largely determined by the national currency volatility. 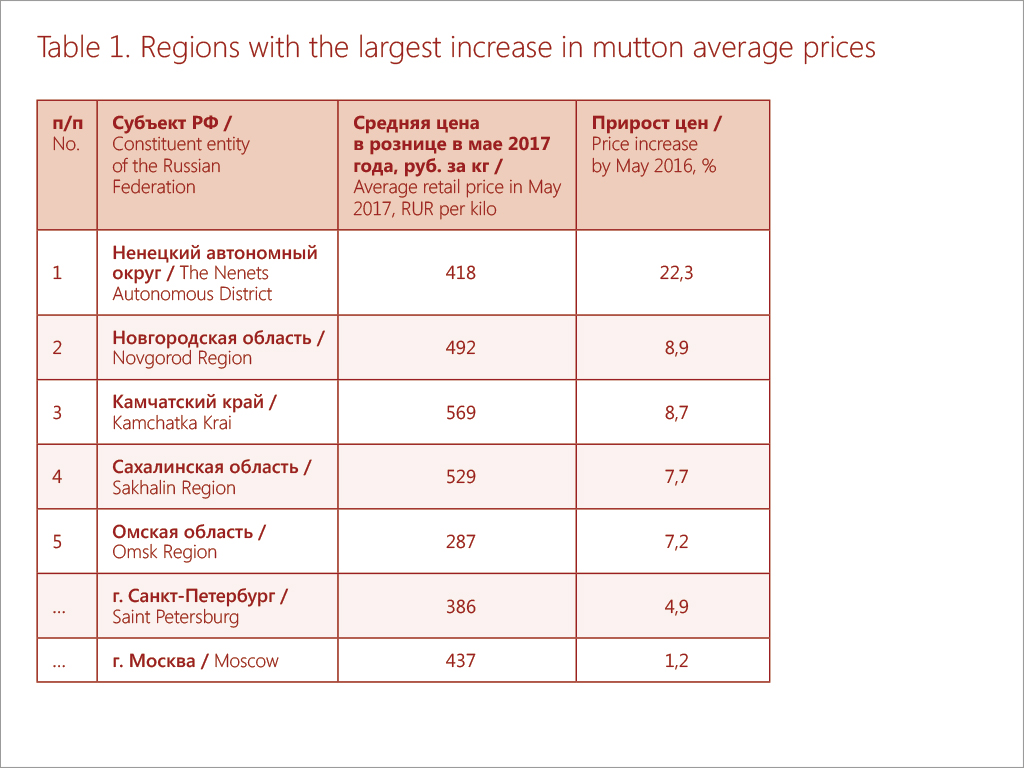 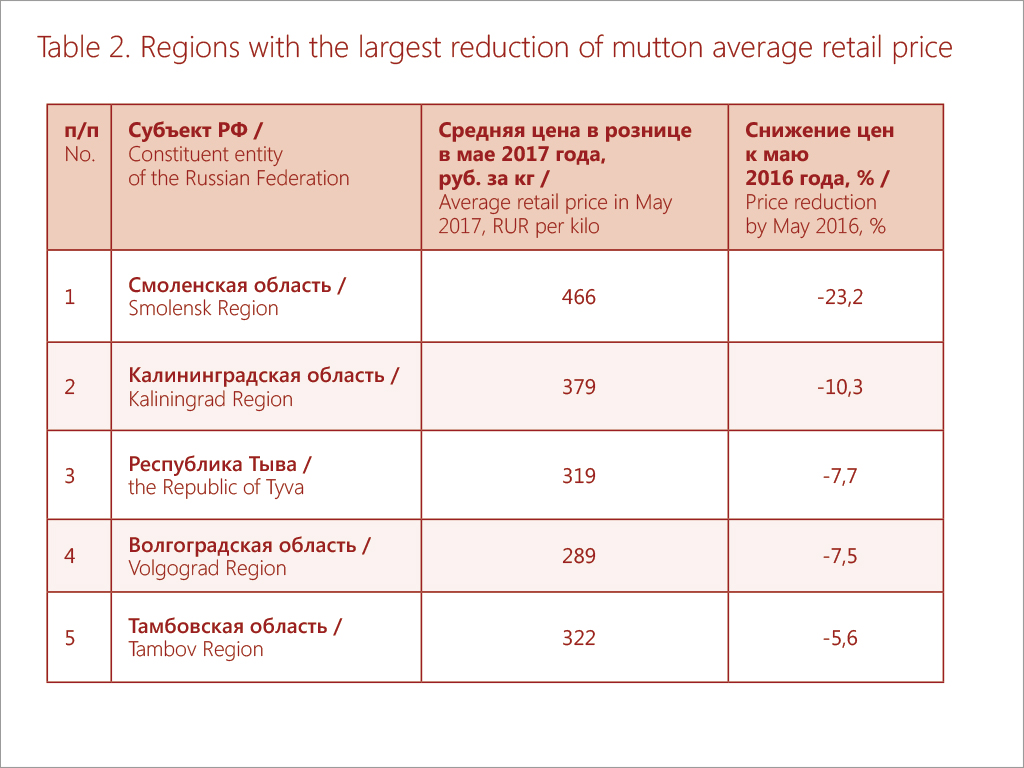 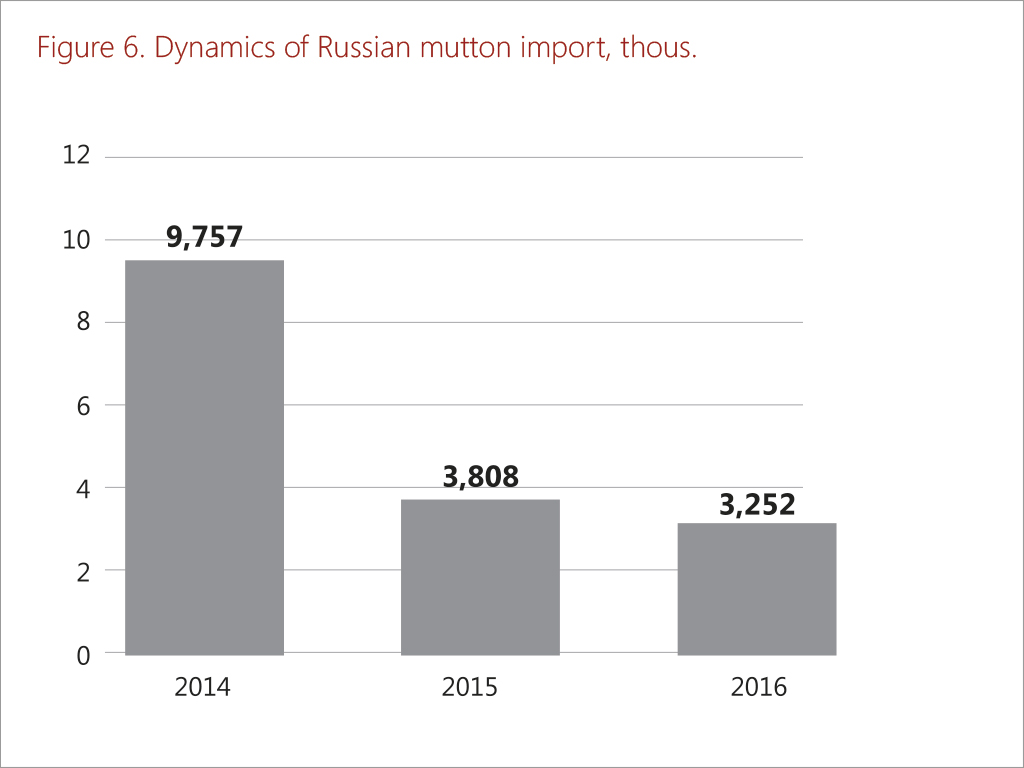 Exportation of domestic mutton was rather negligible in 2016 – 0.115 thous. tonnes, but it grew up by 4.6 times as compared to 2015. The domestic product became more competitive in other countries. 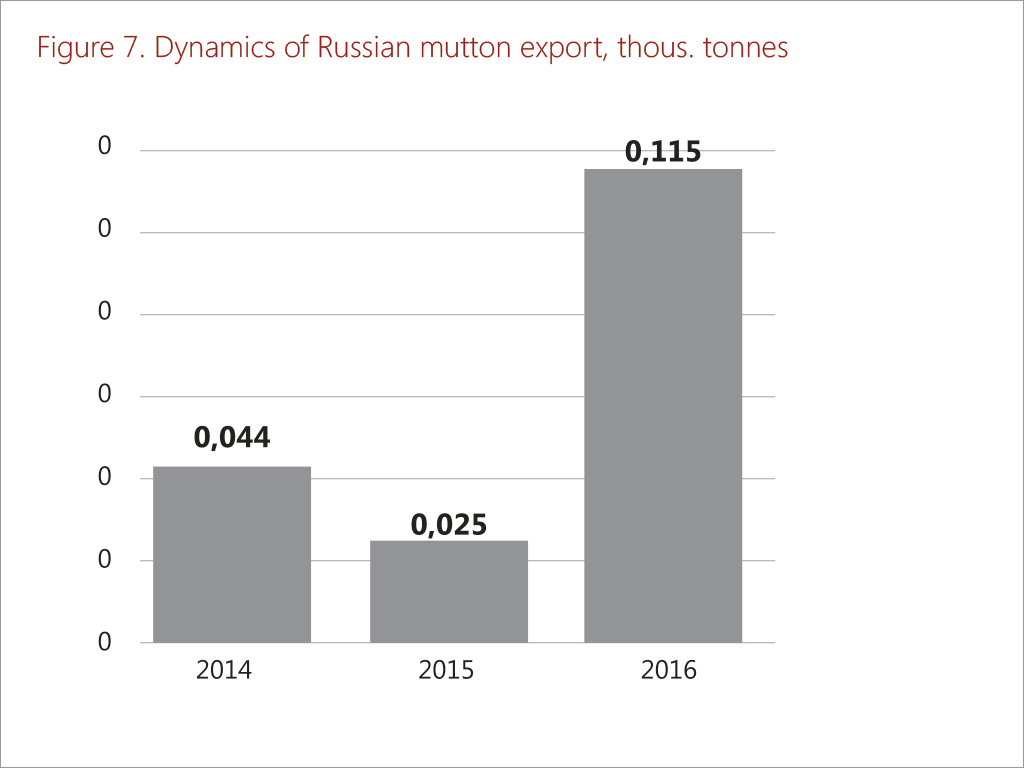 Australia is the principle importer of mutton to Russia with its last year’s share of 49.2% of overall supplies; next goes New Zealand with 25.6% of supplies and then Moldova with its 17.4%. 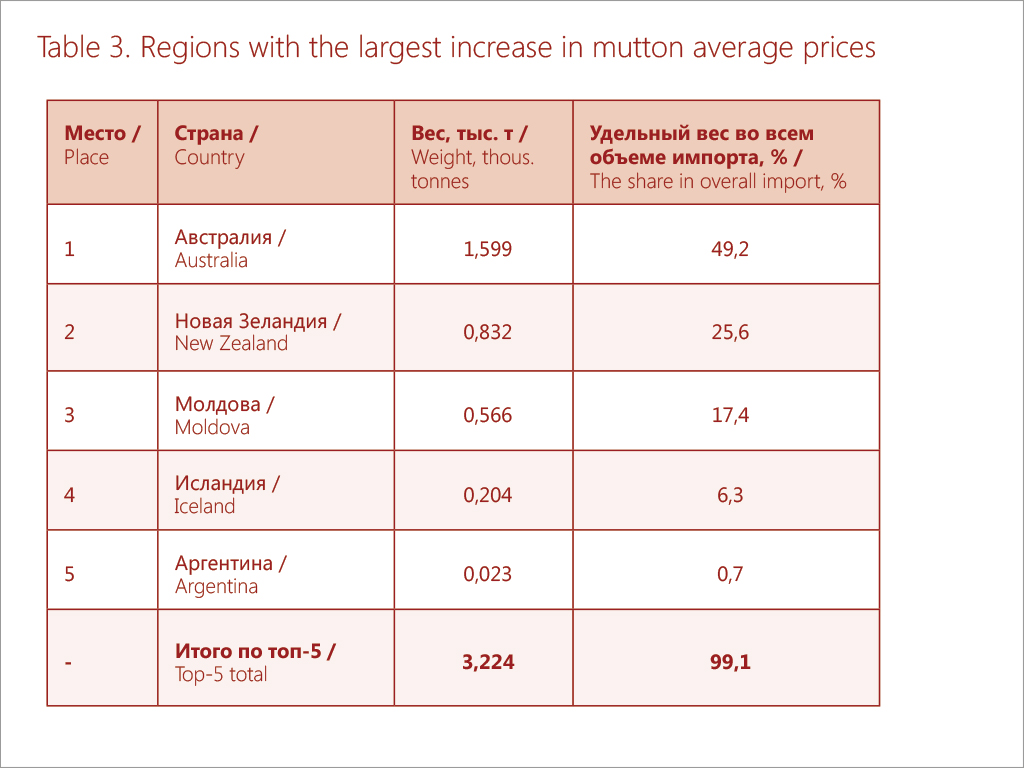 88% of our mutton export is covered by Kazakhstan, the remaining 12% - by Belarus Republic. Besides, there are supplies to Armenia and Azerbaijan, but their share of the common export structure is next to none.

Summing up, it should be said that mutton production in Russia is in embryo if compared to other meat industry segments; there is still kept a high dependence on import supplies.

There can hardly be a chance of a significant increase in demand in this segment, as there is a long-standing food culture in Russia based on three meat sorts: pork, beef and poultry.

Definite growth can be foreseen only for Muslim regions of the country, where demand for mutton could grow up consistently together with real earnings increase of the nation.

Cheap exchange rates for the national currency gives our agricultural holdings and farm households a chance to expand their presence in the international markets where Muslim population prevails. Meanwhile we are on the losing side in this domain.